Yesterday Rob, Michael and myself went on a splitboard tour into Les Avals. We starting in Courchevel 1650 and grabbed the firsts lift. We took the 1650 gondola, Signal chair, Pyramid drags then Roc Merlot chair to the Col du Chanrossa. From there a high traverse towards Les Avals, the next valley over from Courchevel 1650.

From the high traverse, we then took the short boot-pack up to the top of the ridge line and drop down to refuges in the valley. The ride down to the refuges wasn’t great, sun-effected snow but there was still some pockets of powder and a few turns to be had.

Once we reached the refuge we unclipped and set the boards into touring mode. Demounting the bindings, putting on the skins, get poles out and taking a couple of layers off. We use Burton Freebird boards with Sparks bindings and mounting system. They’re super quick and easy to set up. The Gecko skins are easy to use but do leave a slight residue on the bases with affected the wax.

It had been two weeks since the last significant snow fall but the snow on the North Faces was still good. There was already a skinning track put in which was also firm so the hard work had been done. From the refuge to the Col, from which we started our descent, was about 400m vertical. It took us just over an hour to complete, with only one real stop. From the Col we made our descent, the snow was good, if a little tracked. We finished in the bottom of Vallee des Avals and followed the cross country track out to Belverdere.

The whole tour from first lift to arriving back at the bottom of Courchevel 1650 took 4 hours. By this time we were all pretty hungy and went to the Boulotte bar for a Full English Breakfast!

If you’re interested in doing a Splitboard tour or even getting some off-piste snowboard lessons in Courchevel and Meribel then get in touch and see what we have to offer. 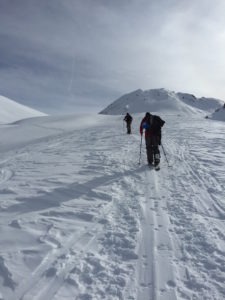 Here is a video of Michael on the descent from the Col des Saulces down to the bottom of Valley des Avals.